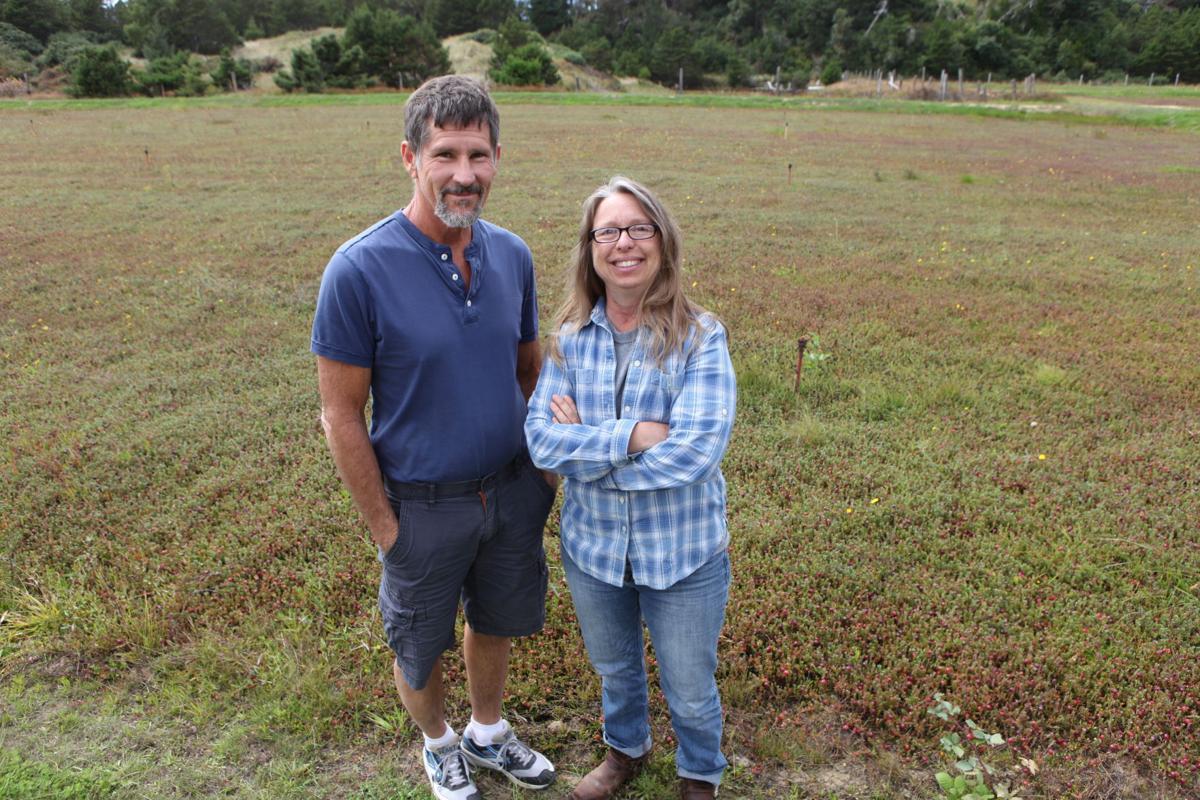 Dave Kranick and his wife Marci Murray on Kranberry Acres, a Bandon cranberry farm that has been run by the Kranicks for 100 years. 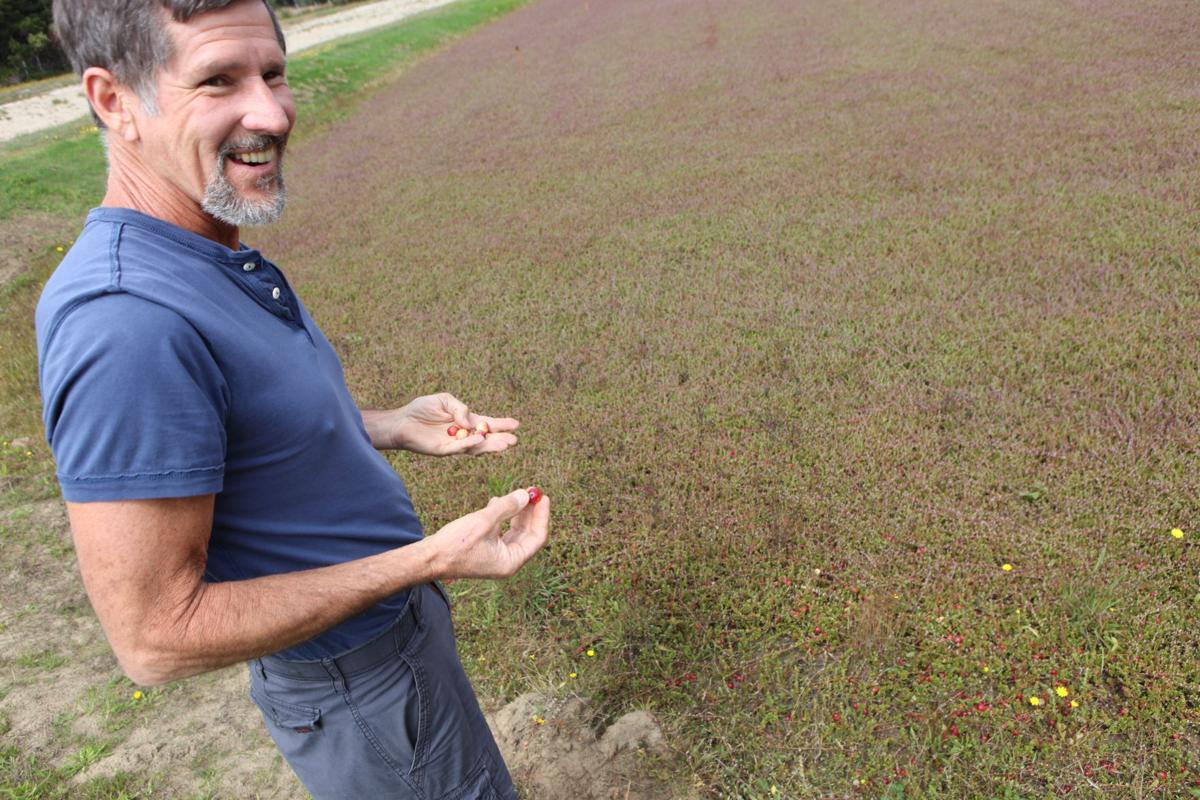 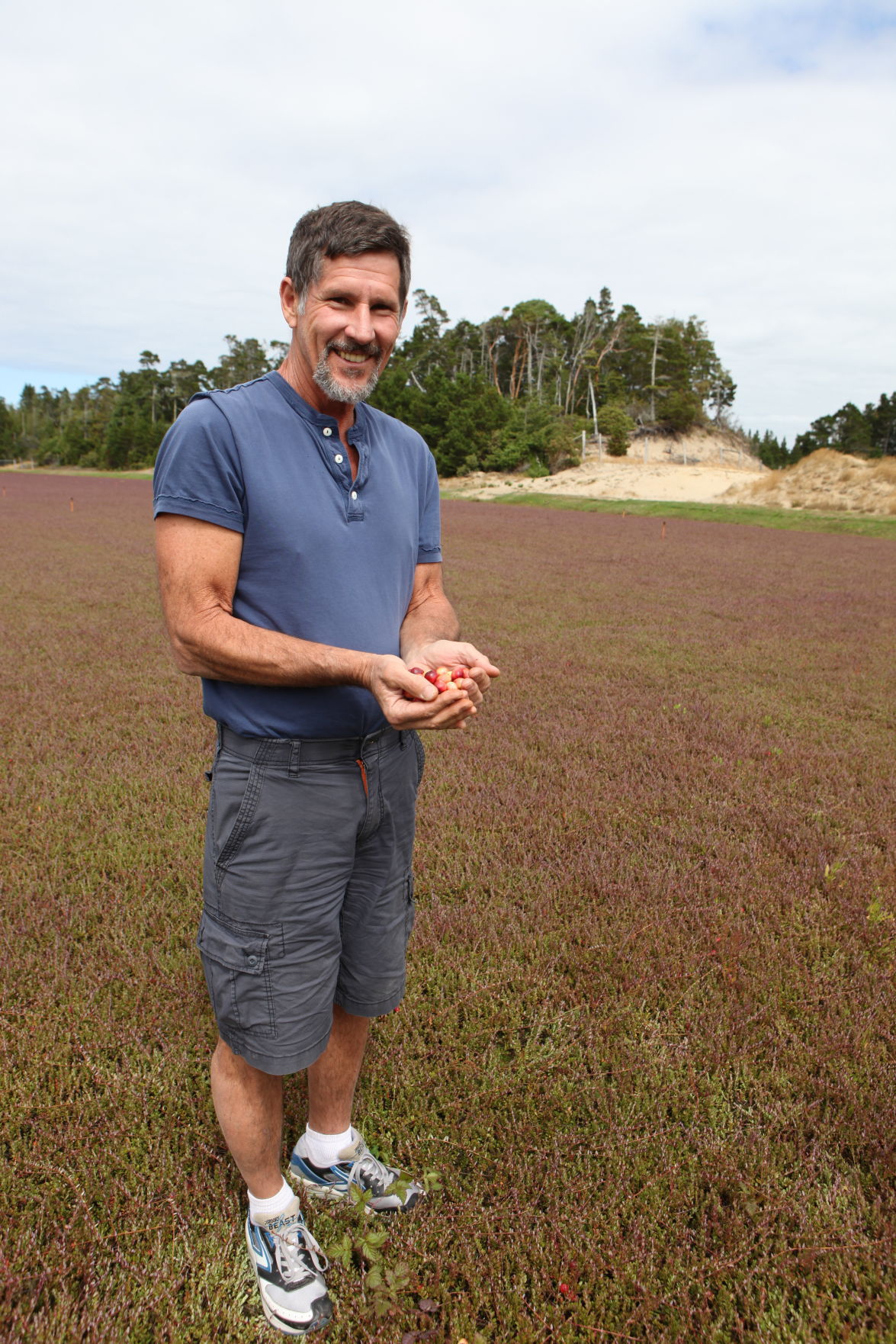 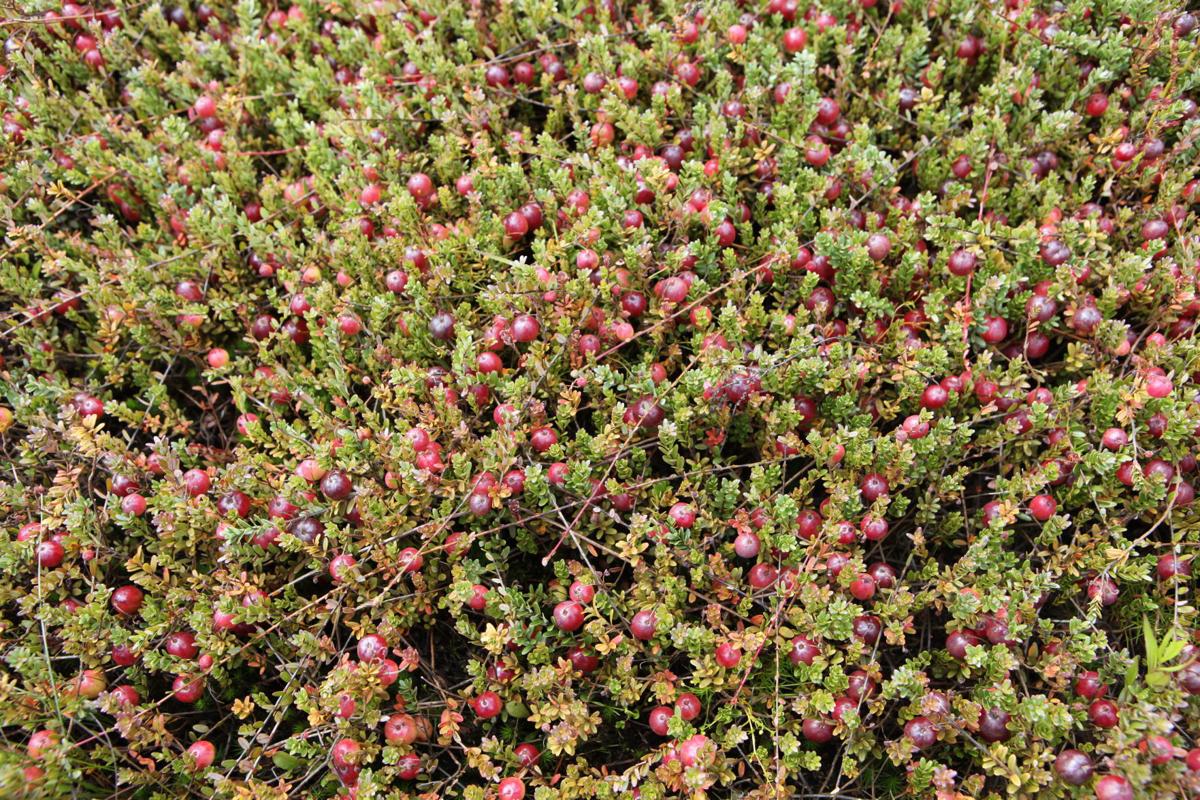 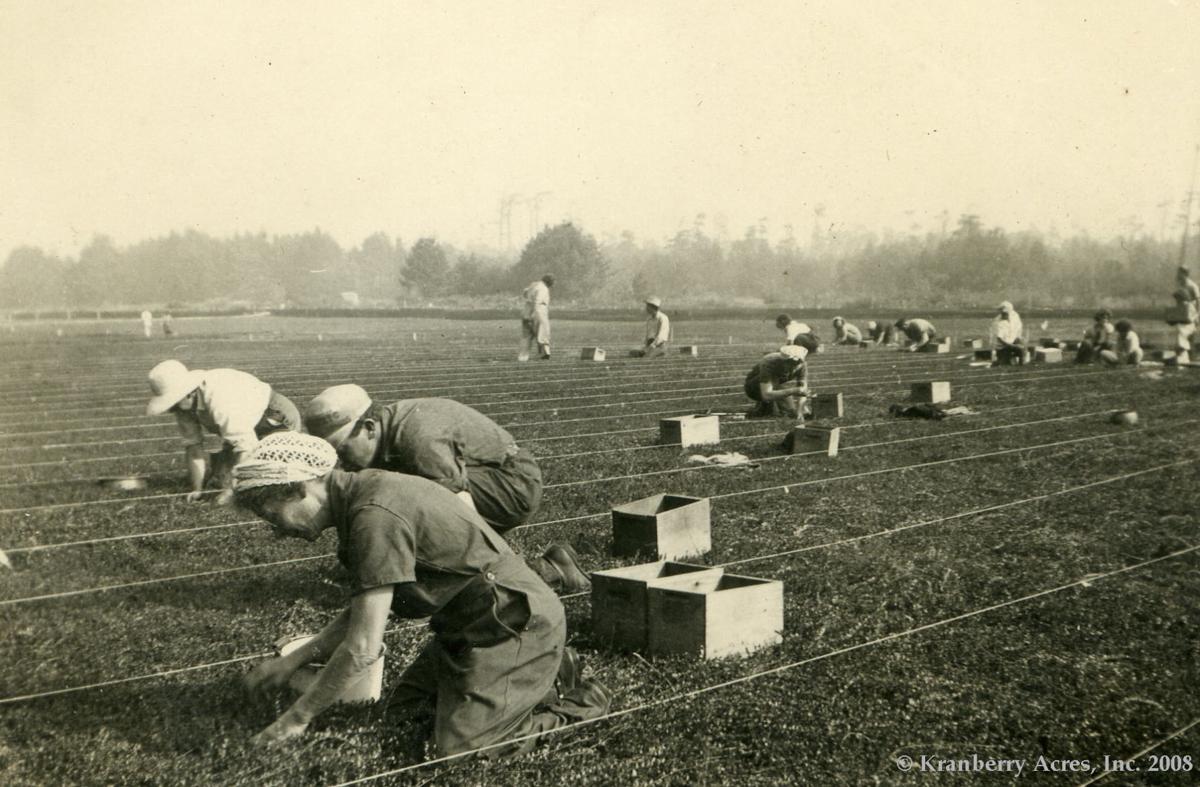 Prior to modern methods, cranberries were hand-picked from the bogs, circa 1930s. 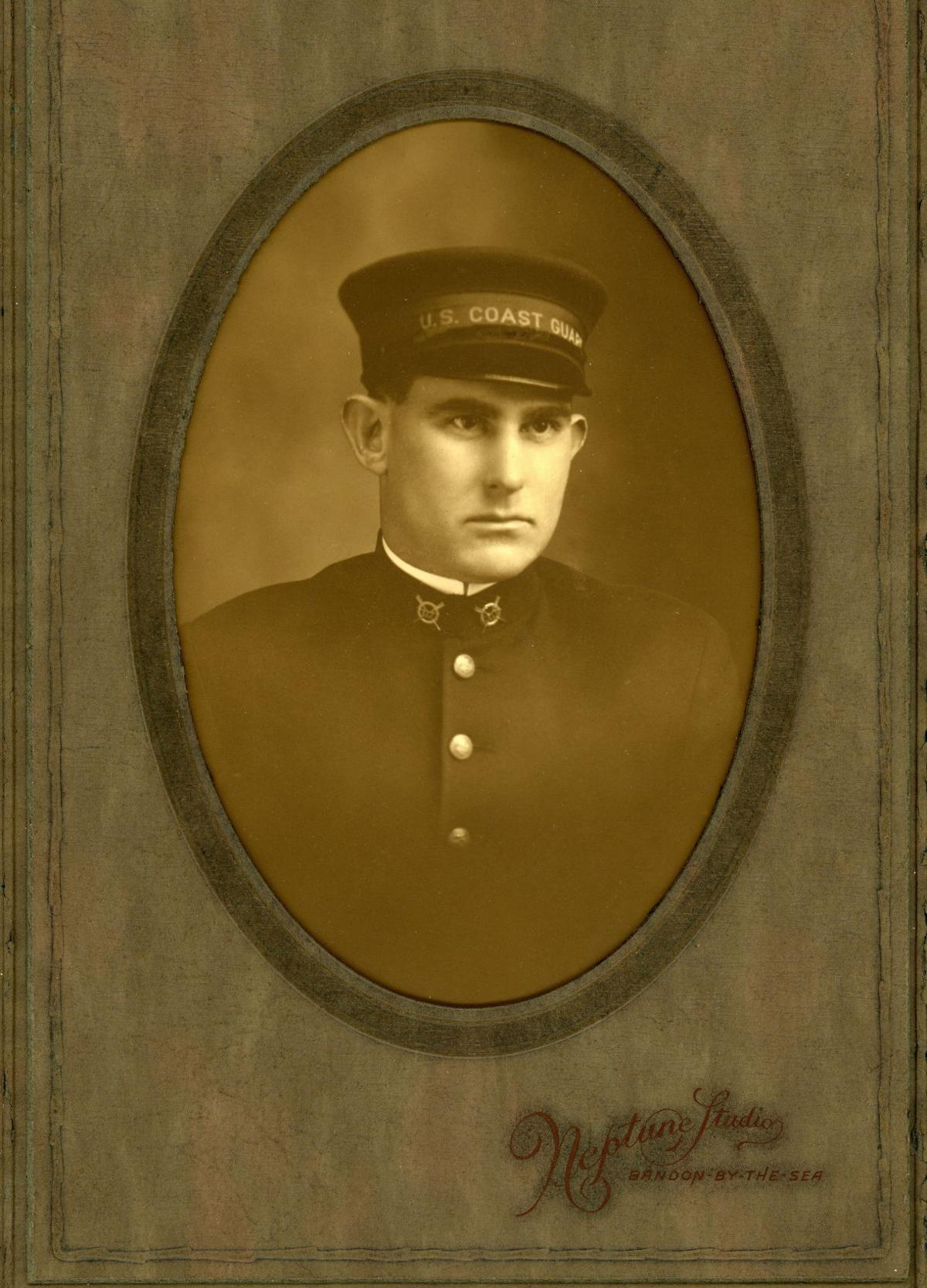 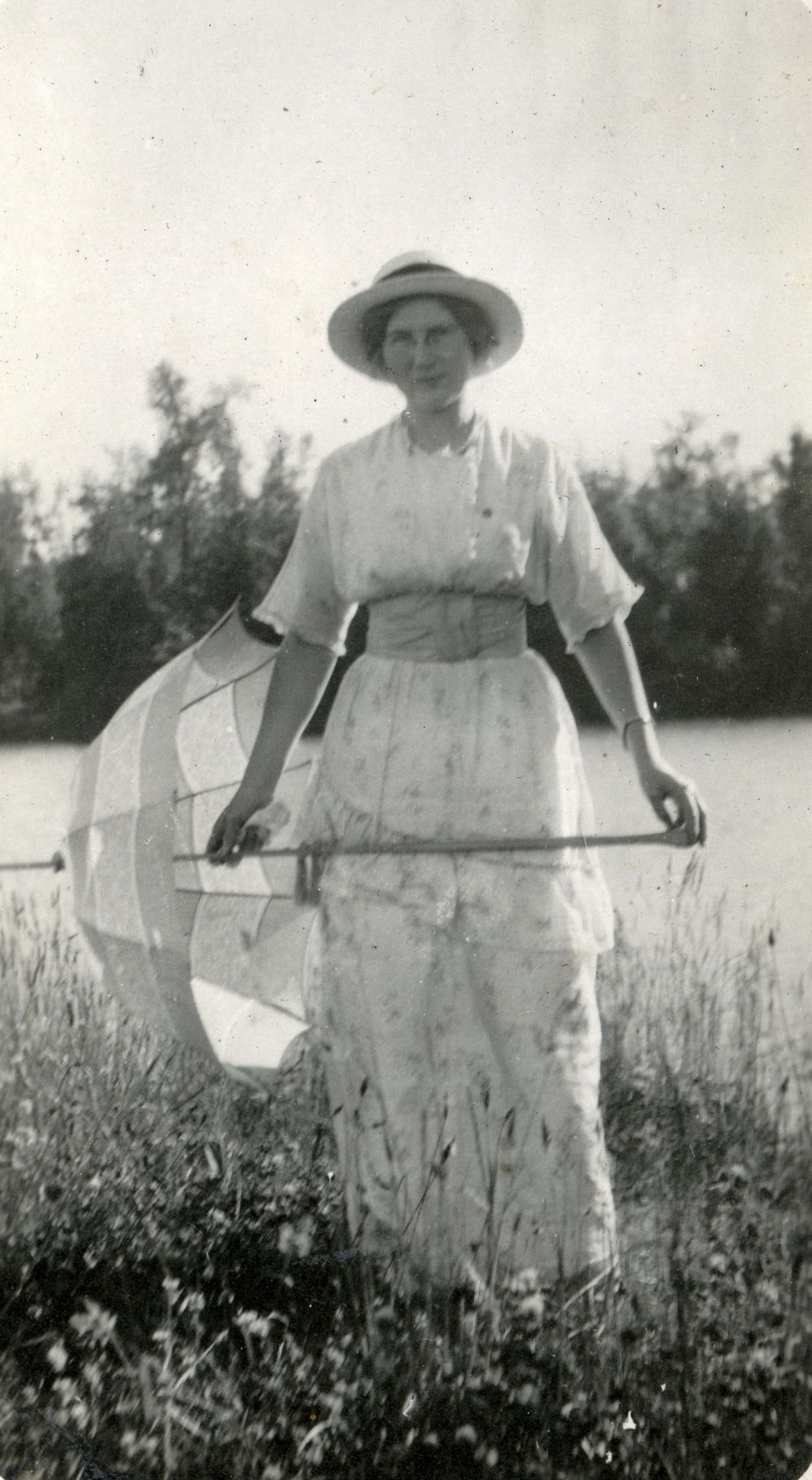 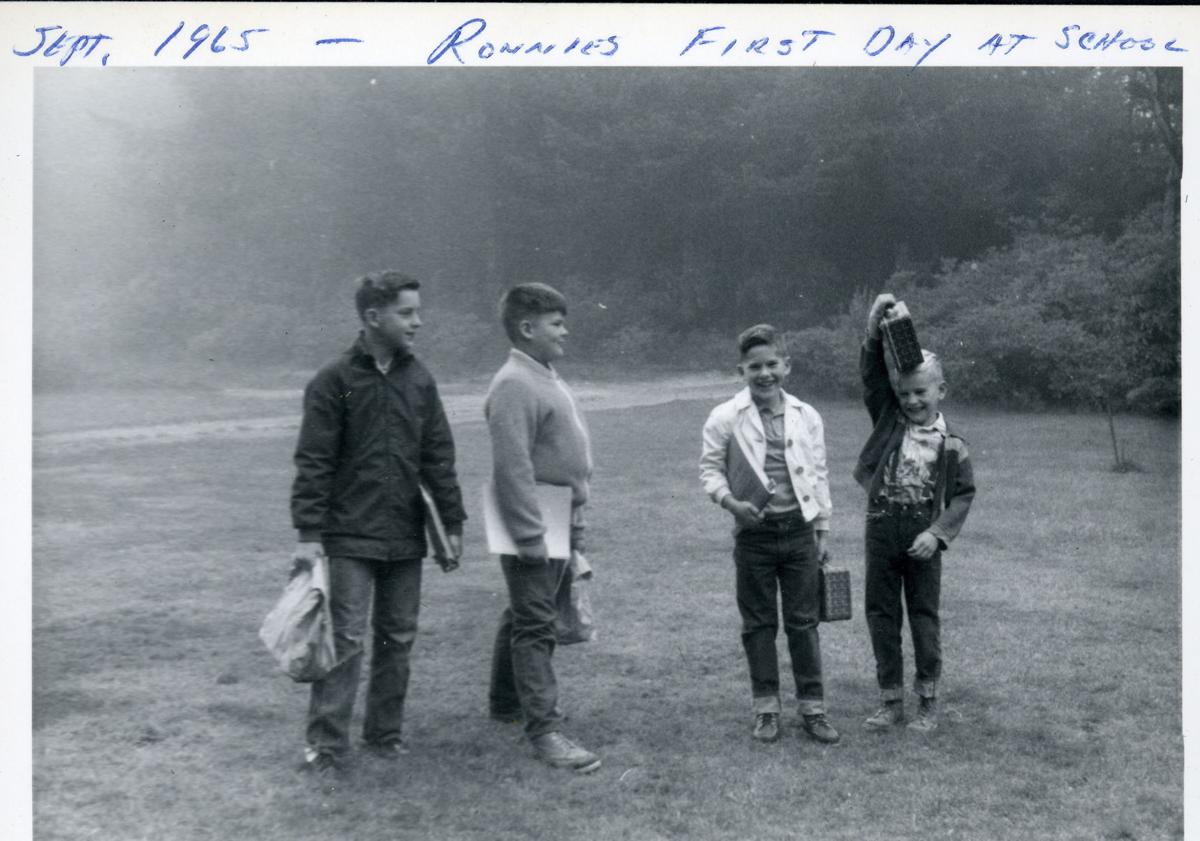 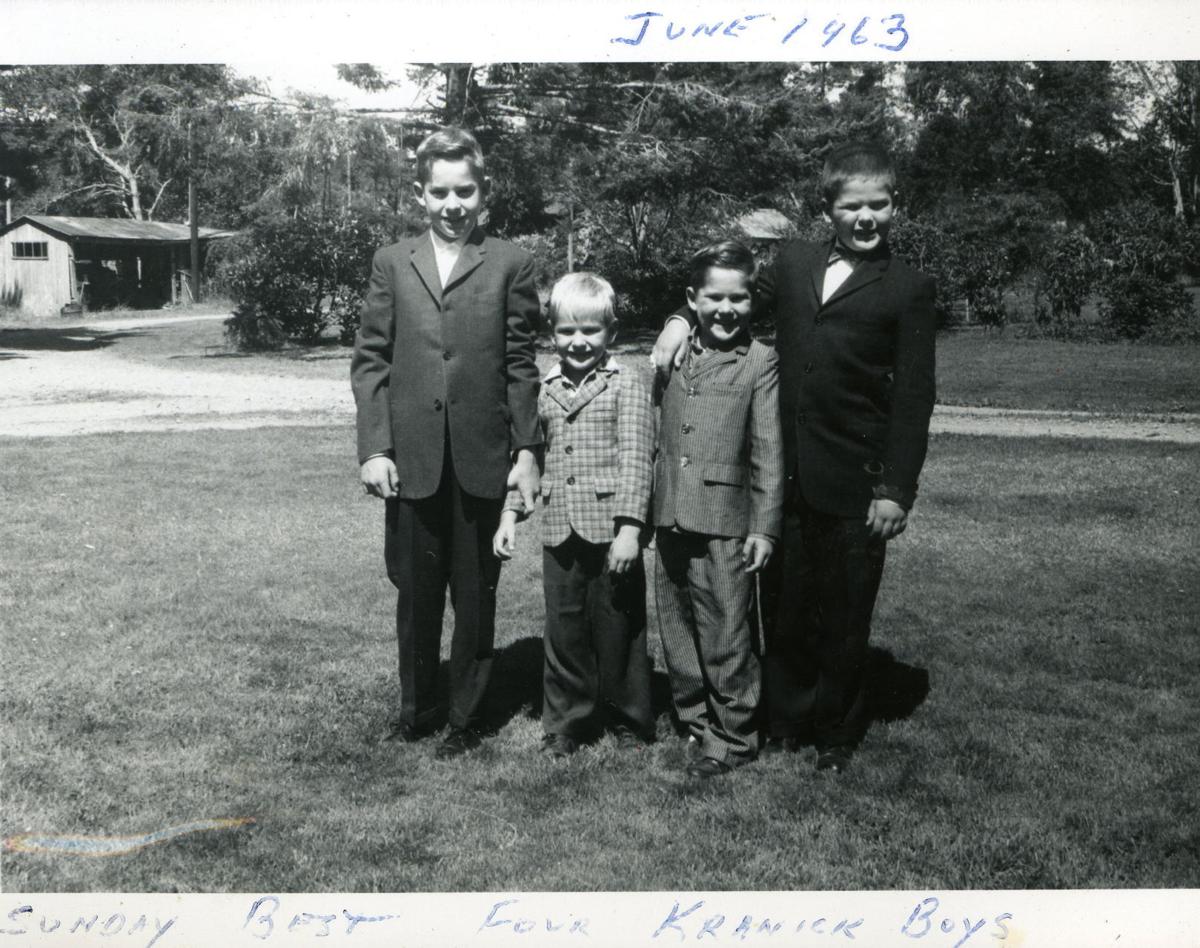 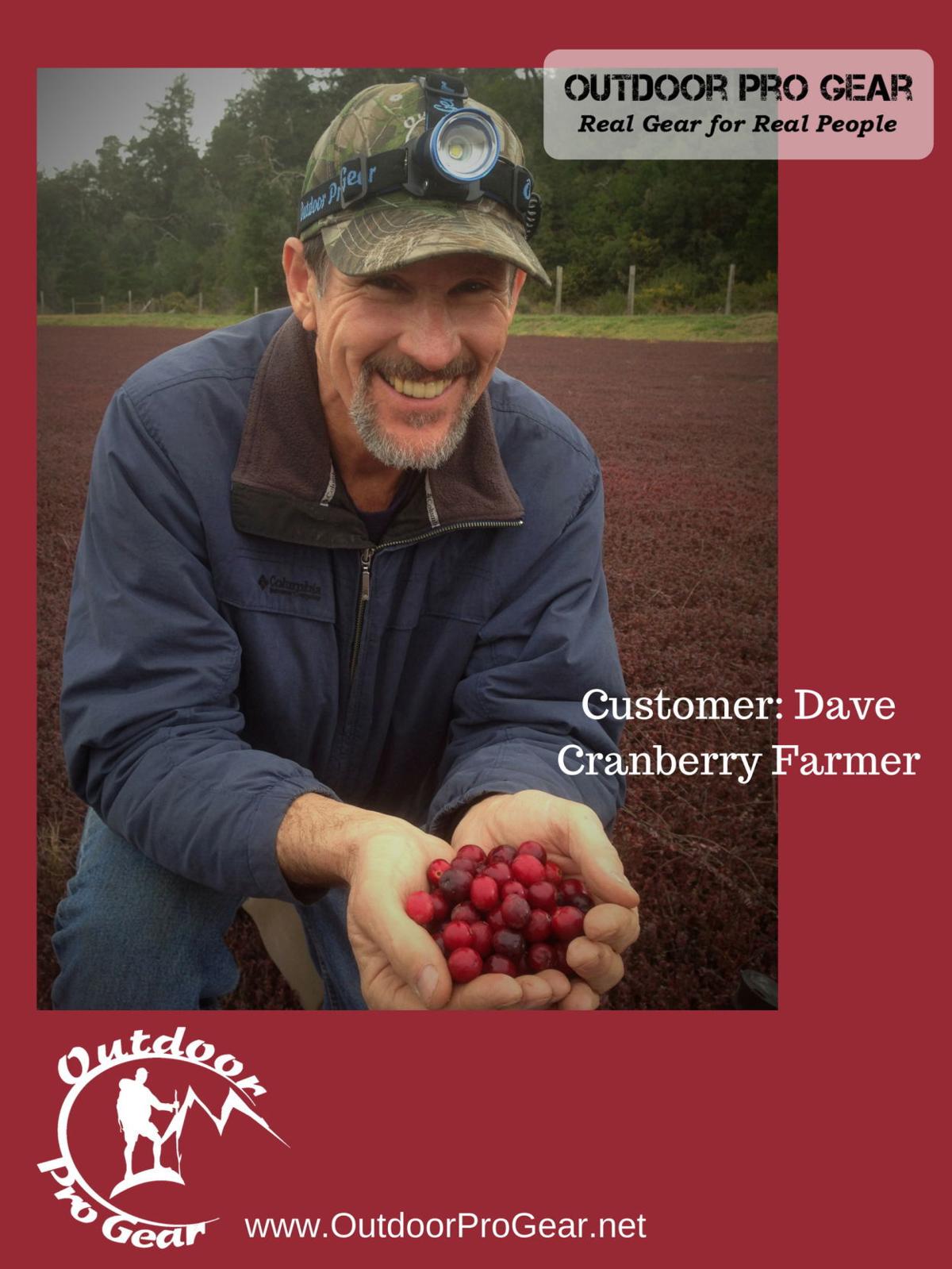 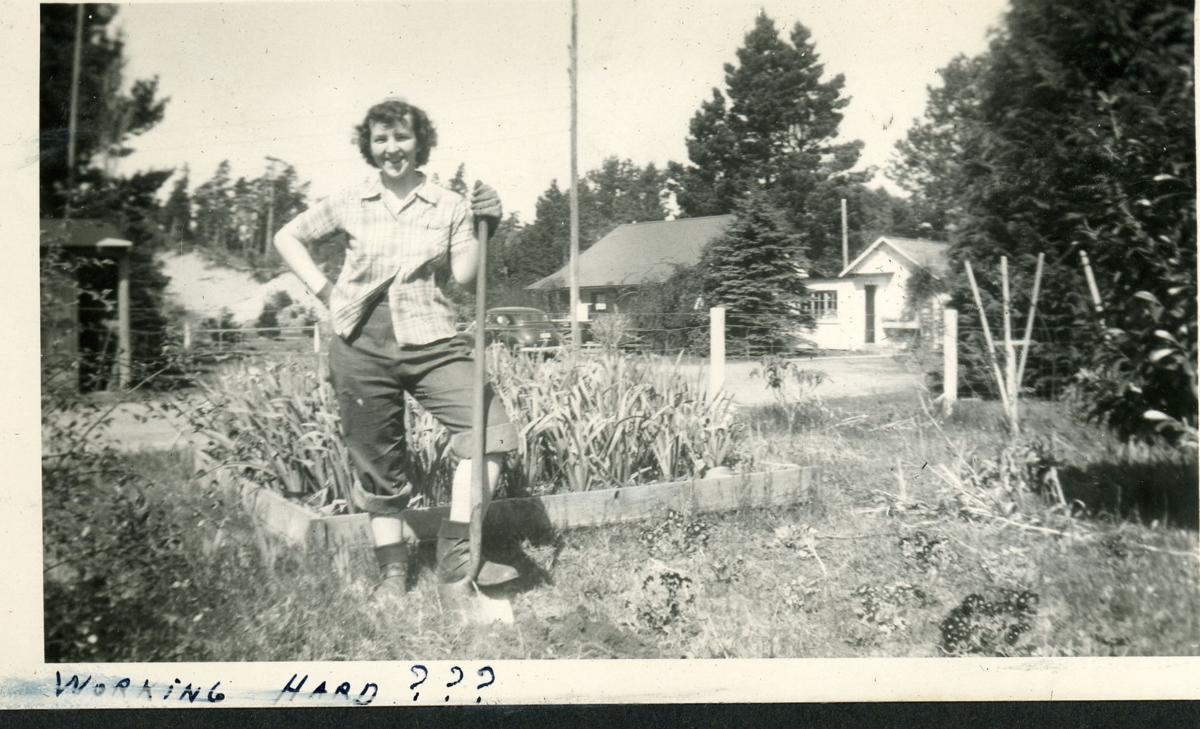 Vivian Kranick worked the farm after her husband's death in 1962 and continued to work it until she was no longer able. She later married Floyd Brown who, with his brother, helped run the farm. 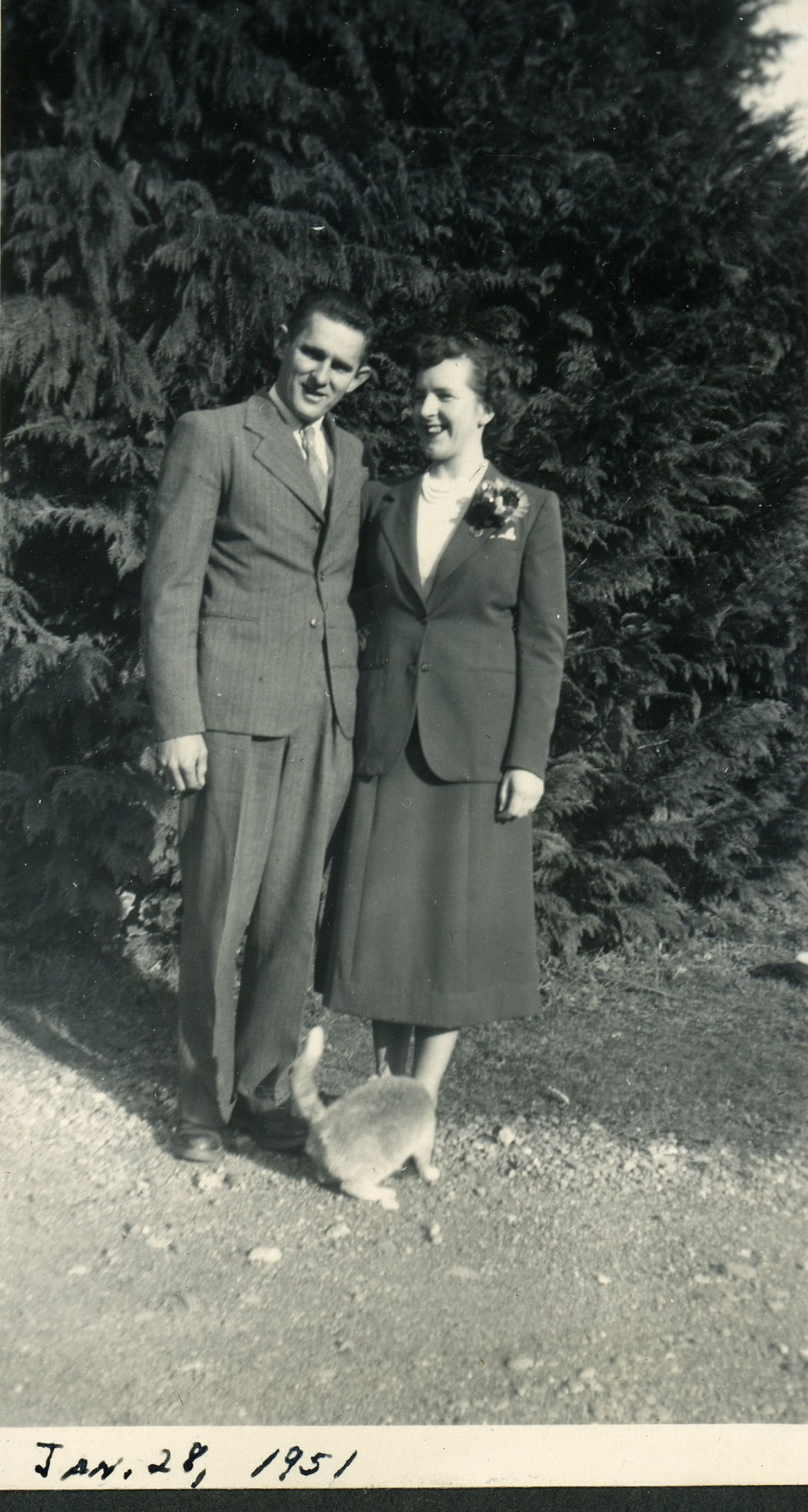 Martin, the only child of Leslie and Ethel Kranick, married Vivian House in 1951 and they had four boys: Douglas ("Pete"), Gordon, David and Ronald.

Dave Kranick and his wife Marci Murray on Kranberry Acres, a Bandon cranberry farm that has been run by the Kranicks for 100 years.

Prior to modern methods, cranberries were hand-picked from the bogs, circa 1930s.

Vivian Kranick worked the farm after her husband's death in 1962 and continued to work it until she was no longer able. She later married Floyd Brown who, with his brother, helped run the farm.

Martin, the only child of Leslie and Ethel Kranick, married Vivian House in 1951 and they had four boys: Douglas ("Pete"), Gordon, David and Ronald.

BANDON - On May 5, 1917, Leslie Martin Kranick bought 160 acres of land on the southern Oregon coast just south of Bandon, some of which was planted with cranberry bogs.

On Aug. 26, Kranberry Acres was designated as the first cranberry Century Farm in the state, an honor that owners Dave and Marci Murray Kranick accepted proudly at the Oregon State Fair in Salem.

Leslie was in the Coast Guard in Bandon. His dream was to have his own farm and grow cranberries. The 160 acres was his dream invested.

Leslie married a girl he had known since sixth grade, Ethel, a school teacher. He and Ethel had one son, Martin. The couple worked at their jobs but always came back to the farm, which they had named Kranberry Acres.

When Martin was 5, Leslie expanded the farm and purchased the Nordstrom bogs adjacent to his. Cranberry harvesting was done by hand in those days, picked and put into small wooden boxes that held a peck of cranberries. The couple paid workers 25 cents a peck.

Other harvesting methods were attempted, but soon someone came up with the idea to flood the bogs and devise a picker that would knock off the berries, which would then float to the top. The berries were then corralled and loaded into trucks.

Martin was the couple's only child and highly intelligent. He graduated with a degree in engineering from Oregon State University at age 20. When World War II broke out, Martin enlisted as a navigator and flew 30 missions over Germany. After the war, he worked as an engineer in California, but Ethel and Leslie convinced him to come back to Bandon to help them on the farm.

Martin met Vivian House, who was working in a cranberry cannery in Coquille while visiting family. The couple married in 1951 in a beautiful outdoor wedding at Kranberry Acres. They had four sons, Douglas ("Pete"), Gordon, David and Ronald. The family, including Ethel and Leslie, all worked and played on the farm together and attended church at the Presbyterian Church in Bandon. The four boys graduated from Bandon High School.

In 1959, Leslie died suddenly. Then the farm took a huge hit when just days before Thanksgiving 1959, the Secretary of Health, Education and Welfare, Arthur Fleming, announced that cranberries were contaminated with aminotriazole, a carcinogenic herbicide. It set off the first nationwide food panic. It was later revealed that farms in Bandon did not use the herbicide, and that someone would have to eat 15,000 pounds of cranberry sauce every day for several years to get cancer from that herbicide.

It was a hard time for cranberry growers and many did not recover financially for years. In 1962, Martin died unexpectedly, possibly from the toll of the previous few years and from emotional damage he had suffered in the war.

Vivian decided to continue farming, raising her four boys as a single mother while running Kranberry Acres. She married neighbor Floyd Brown in 1970 and he and his brother helped with the farm.

Dave Kranick graduated from Bandon High School in 1975 and eventually left the area. He lived and worked in California and married and raised two sons there, Chris and Chad. He moved back in 1990 and started helping his mother on the farm. One son lives in Coos Bay while the other one lives out of state.

"I just kept working," Dave said. "Things seemed like they needed done and I started. Mom really wanted the farm to stay in the family, that was a big deal to her. When my dad died, estate planners told her to sell the farm, but no. She stayed in this house until she moved (to an assisted living facility)."

The next time the farm changed hands was in 2003, when Dave and Marci took over and became the third generation to run it.

Of the 175 acres, 48 acres are in cranberry bogs. Dave has replanted 25 of those acres with new vines. Kranberry Acres has been in the A pool of the Ocean Spray cranberry cooperative for many years and the Kranicks are more than pleased with the partnership.

"Ocean Spray does all the advertising and promotion," Marci said. "It's money we don't receive, but we are investing in the product."

More than half the cranberries in Oregon and Washington are grown by independent growers but the market for cranberries over the years has been volatile for both independents and some Ocean Spray cooperative farmers. There have been more low than high prices for the berries and in some years growers made less than it takes to produce the crop. In the past few years, the market has been "flooded with berries," Marci said.

"There is literally one year's worth in their freezers," Marci said. "But everything the cranberry industry does, Ocean Spray is leading the way, so that's who we support."

While Dave works on the farm year-round and the couple brings in the harvest without help, Marci has started a business to help make ends meet, Outdoor Pro Gear (www.outdoorprogear.net). The business manufactures head lamps and flashlights that have uses on the farm and are for sale online and also at local hardware and farming goods stores.

"Between the farm and Outdoor Pro Gear, we are pretty much here all the time," Marci said.

"We probably gave up a lot to keep the legacy, but I think that was part of her plan," Dave said. "The reason I got the farm was to keep the family legacy. That kind of modifies how you think of investments."

Farms cannot be handed down within the family without a hefty 40-percent tax, so Dave and Marci purchased it from Vivian, who now lives in a Myrtle Point adult foster care facility and suffers from dementia. The couple paid off what they owed Vivian from money they made by selling to Michael Keiser a gorse-covered parcel that is adjacent to the New River Area where Keiser already owns property. Keiser had hoped to build a public golf course on the parcel and his proposal included a controversial land swap. But the plan was denied by the Oregon State Parks Department.

"When I was a kid I could literally walk to the beach from the farm and now I can't because of the gorse," Dave said. "That's one reason we sold some of the property to Michael Keiser. The state just let it go to gorse."

The Kranicks don't intend to sell any more of the farm and are grateful that Vivian had a vision for her family.

"She could have sold the farm to a stranger," Marci said.

"It was something that was really important to my mom," Dave said. "She used to say, 'Oh this will be a Century Farm in 2017.' I'd heard about it since I was a kid."

"I don't think Dave was really interested in that part of it until he was older," Marci said.

The couple visits Vivian regularly and hopes she will recognize that her dream of Kranberry Acres becoming a Century Farm has been realized.

"It's a nice recognition," said Marci. "And we do want to keep it in the family."

"And we get to put a sign out," Dave said proudly.